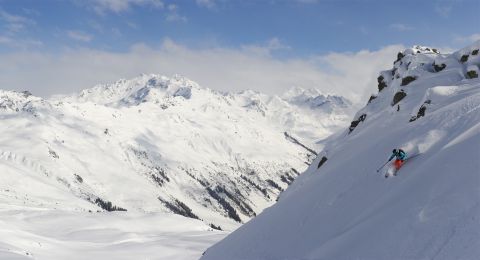 Known the world over for the World Economic Forum which takes place each January in this small alpine city, Davos also offers big skiing the rest of the year, once the financial titans of the world depart. And nearby Klosters, while a favorite royal ski resort for many years, is among the best of the Alps for family skiing and authentic fairy-tale chalets. Originally conceived as a health resort for city-dwellers to escape their respiratory problems in the late 1800’s, the clean air of Davos and the surrounding mountains spawned sanitariums that became classic hotels. Skiers began to flock to the resort after Sir Arthur Conan Doyle published an article about his experience there in 1899. And now, Davos Europe's highest alpine city, a developed version of Thomas Mann’s “Magic Mountain” of more than a century ago.

With the exception of the week in January when the WEF is taking place, Davos enjoys a relaxed atmosphere. With seven distinctly different mountain regions, skiers are spoiled for choice. Freeriders and off-piste skiers go stright to the 2590m Jakobshorn and Parsenn, with family slopes at Madrisa and Pischa for the younger skiers. And Klosters, with long, rolling pistes flowing through the summer shepherd's chalets, is always a good bet for snow, scenery, and great lunches on-mountain. For those who want a day off the slopes, there are countless options for sledding and lugeing - the world-famous "Davos sled" is a testament to the local-born pastime. There is even a night sledding piste from the top of the Schatzalp Gondola.

Davos is also home to a great Swiss ice hockey tradition, the Spengler Cup tournament, held each year around Christmas. Teams from the US and Canada come to compete with Swiss and European teams. Also, the HC Davos is always a contender for the title of the Swiss Premiere league, and a great venue to catch a game.

In summer, Davos is fast-becoming a mountain bike Mecca. The freeride trails here are among the best in Europe, and a favorite destination in Graubunden. Likewise, there are countless day-hikes and longer routes originiating in the Davos and Klosters regions.