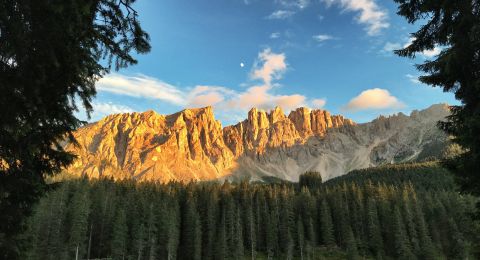 Arriving in the Dolomites is like landing on the moon – an otherworldly sculptural landscape with sheer limestone cliffs, magnificent eroded pinnacles and their adjacent couloirs, bucolic meadows filled with grazing cows, wildflowers and fairytale chalets. Not to mention the warm welcome of the Südtirol people, the delicious cuisine (a mix of the alpine Südtirol and true Italian Veneto), the local wine, and a myriad of 5* hotels, family-run inns, and incredible mountain refugios. This is true heaven for travelers seeking civilized adventure!

Named a UNESCO world heritage site in 2009 for its diversity of spectacular landscapes and geological formations, the Dolomiti and its region of Trentino – Alto Adige – Südtirol is just as diverse in its local culture. Prior to 1919, most of the Dolomites belonged to the Austrian-Hungarian Habsburg empire. Following WW1, this region was annexed by Italy but the Fascist government forbid the Austrian culture & German language; it wasn’t until post WW2 that the Südtirol was granted autonomy and allowed to practice and celebrate their varied and unique cultures. The southern Dolomites located in the Veneto Province are true Italian, the language, Mediterranean influenced cuisine, high-fashion residents and cosmopolitan villages like Cortina. But head just one valley north towards Tre Cime or Alta Badia, and you are  struck with a vastly different culture as if you had crossed an international border. Lederhosen and dumplings are just the beginning, small alpine producers craft artisan cheeses and speck smoked over a wood fire, Schüttelbrot flat-bread, apfelstrudel, beer and renowned wines from the Alto Adige. The local German dialect varies greatly, and is sometimes all but lost amongst the native Ladin language.

But the reason most of us travel the Dolomites is the incredible hiking, biking and skiing for all levels and abilities. In the summer months, the hiking trails are endless – from easy alpine loops accessible by cable car, to week long hut-to-hut trekking tours, and for the more adventurous the alpine climbing & via ferrata selection is some of the best in the world. In winter, the Dolomiti Superski resort is one of the largest in the world, composed of 450 lifts and 1,200 kilometers of pistes, not to mention the incredible opportunities for off-piste skiing in the seemingly endless valleys and couloirs through eroded limestone.