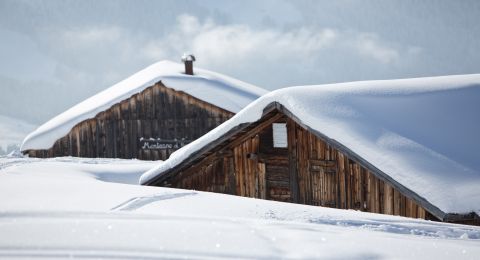 A minute or two is all it takes to fall under the spell of Megève—the icy cold air, the jingle of a horse-drawn carriage, the rush of a cascading mountain stream, the chiming of church bells. If you're lucky it will be snowing, sparkling flakes whirling down, turning the whole village into a scene you’d imagine on a postcard.

That Megève became one of the Alps’ most stylish resorts, and the epitome of French Savoyard alpine aesthetic, is wholly due to the influence of Baroness Mimi de Rothschild. After the first world war, she was relaxing in St. Moritz, and horrified to share her hotel with a German steel and arms magnate. She promptly took her Norwegian ski instructor and a French hotelier to the Haute Savoie determined to find a suitable location for a French resort that would become just as grand, to create "a St-Moritz Français". They discovered Megève, a small Savoyard farming village in the valley of the Arve River, at about 4,000 feet, facing Mont Blanc. Among its attributes, "its medium altitude, its gentle climate and slopes. In Megève nothing is rude, nothing is abrupt, and everything evokes feminine charm."

By 1924, the Baroness had bought an old guesthouse on a hill overlooking the village and radically transformed it into the Hôtel du Mont d'Arbois. Megève was launched as a destination for the beau monde. The “chalet” style that her architect designed from reimagined shepherd’s huts created a trend that came to characterize ski resorts around the world.

World War II interrupted Megève's expansion, but after the war it became a favored playground for Parisians in the flush of post-war partying. Stage and film stars flocked to the beautiful alpine village, and by the 1950s Megève was such a chic social scene that Jean Cocteau nicknamed it "the 21st arrondissement of Paris".

Today it's as glamorous as ever, located just 45 minutes from Geneva, and around the corner of Mont Blanc from Chamonix and St. Gervais. Megève is an ideal family ski resort, with gentle, sunny slopes over 232 square miles of ski terrain, several prestigious ski schools and a host of international events including Snow Polo and Snow Golf championships. It's now a summer resort too, with hiking and climbing, biking and paragliding. And winter or summer, it's just as attractive to the less sporting set, offering some of the most beautiful, well-equipped luxury hotels and spas anywhere in the Alps. The Sibuet family has run the majority of the accommodations since the resort’s inception, and has created a level of service and quality that has defined the Megève ideal.