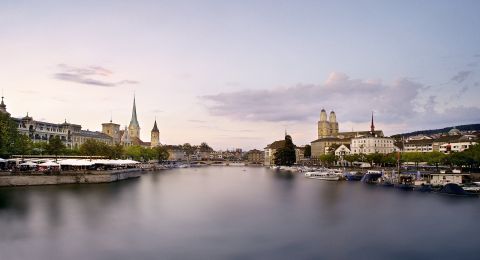 Zurich, much like Geneva, is a city of several strikingly different characters. On the one hand, Switzerland’s largest city is the financial industry’s true north, the bastion of Swiss banking and an international hub. On the other hand, you have a historic guild city, whose blue-collar roots are once again creating distinctly contrasted neighborhoods to the financial district, with funky boutiques, craftsmen and women’s ateliers, vibrant markets, and excellent unpretentious restaurants. Make no mistake, the Bahnhofstrasse still has the luxury couture and watch shops, but Zürich is also experiencing a renaissance of cool. Zurich West is home to the new movement, where old factories and derelict land is being transformed into shops, gardens, and collective art and design studios, its well worth an afternoon visit.

The classic 5-star hotels of the city are the epitome of Swiss formal hospitality, but there have been several additions that also reinforce this idea of a new Zürich.

When the former Hürlimann brewery closed its doors in 1996 a competition was held to find a use for the site. The result, a mixed use facility blending modern design and conservation, home to Google Switzerland, the B2 Boutique Hotel and a public thermal bath, built in the vaulted stone cellars of the 19th century brewery.

For more traditionalists Zurich is a varied museum in itself, stroll through the old town and the Augustinerstrasse, with its cobbled streets, oriel box windows, medieval influences, and Roman origins. Visit the Marc Chagall-designed stained glass windows at the Fraunmünster Church, stop at Confisserie Sprüngli (part of the Lindt Chocolate empire), for afternoon tee and chocolate. Or tour the Swiss National Museum with one of the most important cultural history collections in Europe and the world.

And with an international airport that accesses almost everywhere in the world, it is an ideal arrival and departure point for any further adventures in Switzerland or the eastern Alps.