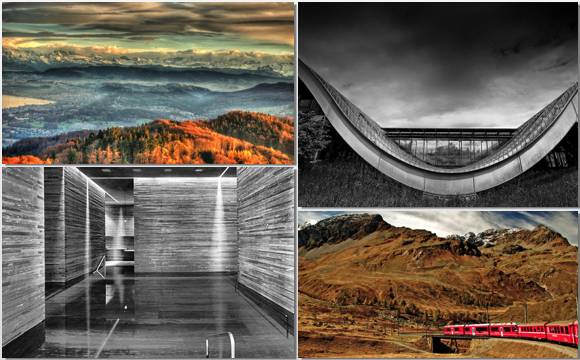 Swiss "Off-Season": off–season. off–sea·son \ˈȯf-ˌsē-zən\ : a period of time when travel to a particular place is less popular and prices are usually lower.

When we started Epic Europe, we offered 2 products; summer & winter - this was the bread & butter, what people came to Switzerland for - the quintessential hikes through fields of wildflowers and grazing cows, and the renowned skiing of the Alps. 8 years later, we are equally as passionate about the "off-seasons" of spring and fall, when the tourists have gone home and what remains are the living traditions, culture, and the fascinating day-to-day life of an incredibly diverse country.

With the first dusting of snow on the mountains, Swiss life moves to lower pastures, and our schedule switches from hiking & mountain biking to more cultural pursuits (at least until the snow falls harder!). A day-trip on the train to Basel for a visit to one of the many world class contemporary art galleries, or a long weekend at the Val Thermes designed by Pritzker Prize winning Swiss architect Peter Zumthor, this is the time of year we can relax in the peace and quiet of the off-season.

If we had the luxury of flying by the seat of our pants this weekend, it might look something like this:

Day 1: With perfect Indian Summer weather, blue skies and 70 degrees, we are thinking, "it's the off-season, let's take a long weekend." Where better to enjoy the sun than the Lavaux Vineyards clinging to the cliffs above Lac Leman, exploring the tiny winemakers caveaus at the annual "Fete des Vendanges" in Lutry. Freshen up at the Beau Rivage Palace 5* Lausanne, and grab a bite to eat at Michelin-starred restaurant Anne Sophie Pic, before heading out to the "Museum Night". 24 museums take part in this wild event commencing the beginning of Lausanne's cultural season. Music and art performances, films, gallery openings and revelry until the wee hours of the morning.

Day 2: En route to Bern, it's a short side trip to the Gruyères region for the fabled Désalpe, the ceremonial procession of flower decorated cows returning to the lowland valleys after months spent in the mountain alpages. Followed by the Fribourg Bénichon, originally a religious celebration giving thanks to the gods for the harvest. Over the years, the ceremony's religious overtones have disappeared and the gastronomic and festive side remained - you eat and drink and, if you manage to get on your feet again, dance! Overnight Hotel Schweizerhof 5*, Bern.

Day 3: Lazy brunch at the Schweizerhof, followed by a visit to one of our favorite Swiss Museums - the Zentrum Paul Klee, dedicated to Bern’s famous Bauhaus artist and designed by architect Renzo Piano. This afternoon, stroll the medieval streets of Bern during the SlowFood Gourmet Walk, part of the annual Swiss "Semaine du Goût", or Week of Taste. Hop the train to Zurich for a late-night showing at the Zurich Film Festival, the rapidly growing event focusing on the promotion of new director talent from around the world. Overnight at Zurich's most authentic address the Widder Hotel 5*, in the heart of the Altstadt (Old City).