WHERE TO SKI IN THE ALPS NOW

WHERE TO SKI IN THE ALPS NOW

Winter has arrived in the Alps!

Last Friday was still autumn in all its glory - yellow larch trees and fiery red maples illuminated the mountainside of the Val de Bagnes. But by Saturday, it was white, with snow limits dropping down to around 1000m. With a solid forecast of cold temperatures and precipitation across the Alps for the next 2 weeks, the ski season is shaping up nicely, so we thought we would share some of the early season openings across the Alps:

Zillertal, Austria: The Zillertal is home to 179 lifts and 508 kilometers of slopes facilities at an altitude of 580 meters to an altitude of 3,350 meters above sea level. The Hintertuxer Gletscher offers skiing year round, but with the recent snowfall they are expanding operations daily and claiming powder conditions on the upper mountain. 15 lifts and 13 trails are open. Ski report Zillertal

Sölden, Austria: Famous for hosting the annual first FIS World Cup ski race of the season on the Rettenbach glacier. Thanks to heavy snowfalls and perfect snow-making conditions, will commence full winter operations on 11 November 2016, for a total of 15 mountain lifts and 46 slope kilometers including many mountain restaurants. Currently there are 9 lifts and 33m of pistes open - Sölden Ski Report

Tignes, France: Part of the larger Espace Killy, the French ski resort of Tignes claims “we ski before… and after everyone else!” This year the season commenced on the Grande Motte Glacier @ 3450m October 1st. By the end of the week (Nov. 11) they will also open the “Double M” piste, which allows you to return to the heart of Tignes Val Claret from Grande Motte glacier. You also have the opportunity to watch and be inspired by the French ski team training on the Grande Motte. Tignes Live: weather and ski report

In Switzerland, Zermatt is topping the list, claiming 100cm’s of snow on the glaciers above 3000m & 21km of pistes and 8 lifts open. With frigid temps facilitating snow making and more snow in the forecast, expect more openings from the Gornergrat shortly. The Sunnega/Rothorn side opens from the 26th of Nov. Check out their live panoramic map for up to date openings  On an unrelated note – be sure to check out the new Red Bull TV series documenting the heroic efforts of the rescue team at Air Zermatt “The Horn"

Cervinia, Italy plans to open for skiing on Saturday Nov. 11. Conditions permitting, the Ventina slope from the Swiss border – Plateau Rosa/Testa Grigia to Cime Bianchi Laghi will be open, allowing for cross-border skiing from Zermatt to Cervinia and lunch in Italia.

This weekend Cervinia is hosting the “SkiAlp” training weekend – an intensive training course in ski alpinism if you feel like a little pre-season training before some pasta or polenta!

Diavolezza, Switzerland: One of the 4 main Engadin resorts, Diavolezza opened for skiing on the 21st of October this year. Skiers can enjoy the piste from the Firn chairlift and lunch at the Berghaus Diavolezza overlooking the spectacular Piz Bernina and Piz Palu. With heavy snowfall down to the valley in St. Moritz, the 2 largest resorts Corvatsch and Corviglia expect to open on November 19th and 21st respectively

Saas Fee, Switzerland: The reliable favorite for year round skiing in Switzerland, is reporting a 130cm base, with 6 lifts and 30 of 100 runs open. Saas Fee Ski Report

Last but not least, Verbier is slightly behind due to the lack of glaciers, but will open Lac de Vaux on Friday, and possibly more with a ½ meter of snow predicted in the next 3 days.

Isn’t it amazing how thoughts of skiing help to escape politics! 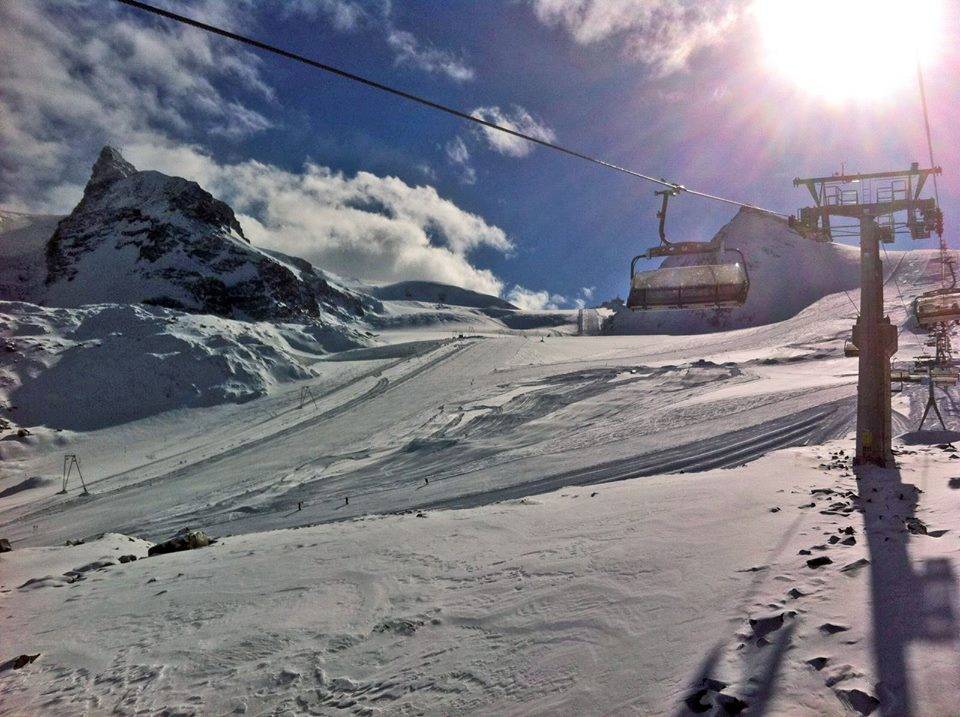