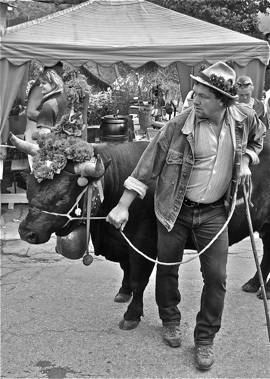 I have to admit, I have always loved the end of summer and change of seasons in the mountains; one day you’re swimming in the lakes and basking in the glow of the late summer sunlight, and then two days later, the trees are turning color, the high mountains get their first dusting of snow, and you are dreaming of powder skiing. In the small valleys of the Alps, this transition of seasons symbolizes something entirely different. It is the end of the summer grazing, and time for the descent of the cows from alpine pastures to their barns for winter. A worthy cause to celebrate, after months of hard work, and numerous battles (between the cows) to establish the queen, or “Reine” of the herd.

The Désalpe, literally “from the Alp” (or mountain, Almabtrieb in German) is a sacred procession of the cows, adorned in floral wreaths and decorations, back down to the villages for winter. The time of year is dictated by the end of grass growth in the high mountain pastures. For the previous 4 months, local farmers have cut and stored hay for winter, most often using traditional methods of scything, and following the cycle of the full moon. At our house in the Mayens de Bruson, we are required, by law, to cut the grass so as to preserve grazing territory. In my limited experience with scything, I found it to be back breaking, ankle-rolling work! But traditions die hard in these small valleys, and it seems to me that not unlike scything, the Désalpe is one of the best-preserved cultural traditions in Switzerland, and well worth the experience if you are ever nearby.

The cows leave the pasture according to an established hierarchy that is built up over the summer through non-violent fighting. The Herens breed of cows (descendants of cattle indigenous to Val d’Aosta Italy) that dominate the pastures in the Valais region of Switzerland have an innate predisposition to fight amongst themselves. They lock horns, and grunt and push, until one of the pair tires and surrenders. They seem to honor the alpha female, following her from pasture to pasture, and allowing her priority in the selection of the best grazing.

At the end of the summer, the queen is enshrined not only by the other cows, but by the local paysans (traditional mountain farmers) as well. The Herens are festooned with floral wreaths and crowns, the Reine (queen) is distinguished by her large bell and richly embellished collar, and of course her ornate crown made from flowers, ribbons, and often times a dwarf mountain pine. In the Val de Bagnes (Verbier), the defilement (parade) is accompanied by the largest raclette festival in Switzerland; “Bagnes, Capital de Raclette”. It is a magnificent celebration of traditional farming and all things cheese. There are sheep, goats, horses and ponies, and even several donkeys with long dreadlocks that look like Mr. Snuffleupagus. Old men with “cheese-guts” the size of Santa Claus, and many people in traditional Bagnes dress mix with locals and expats, ski-bums and tourists. This year welcomed “Oesch's die Dritten”, an award-winning, yodeling, accordion-playing family from the Bernese Oberland, who were really quite a sight to behold, even if you don’t care for traveling family yodeling bands….