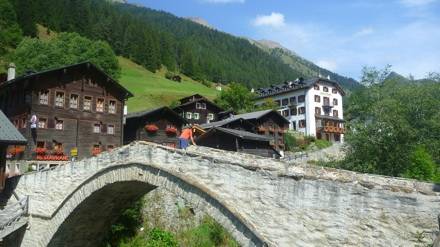 While the Swiss topo maps are legendary for their accuracy and are invaluable to us from a skiing, hiking, and biking standpoint, sometimes you can still be amazed by what you find right under your nose. Every once in a while, we’ll be searching for that next great undiscovered trail, mountain bike ride, or ski run, and you look a little harder at the map, and find something magical that pops out: a surprise valley that you never knew existed.

On the way back from the EuroBike trade show in Germany this past month, we found ourselves at the head of the Rhône Valley, and saw that a road to the south entered a 2km tunnel, emerging into a valley called the Binntal, that we’d never heard of before.

Far from undiscovered, the Binntal had hosted distinguished guests for ages, even Winston Churchill once stayed at the belle epoque hotel Ofenhorn in Binn. And the typical Walser wooden houses date back to the 1500’s, some of Switzerland’s best-preserved examples of this classic architectural style. but Binntal’s true fame comes from its rich mineral deposits, which have gained it designation as a natural park today, and a source of energy for crystal-hunters and enthusiasts.

This remote, hidden valley is a perfectly-preserved example of what brought tourism to the Alps a century ago; without ski-lifts and large hotels, you can still get that romantic belle-epoque feeling from the quaint villages and genuine hospitality of the residents. We can’t wait to come back and see it in the winter or spring, maybe on a version of the Tour du Soleil, the old smuggler’s route between italy and Switzerland.

A couple of weeks later, we decided to head up the Val d’Hérens for an autumn View of the Ferpècle and Mont Miné Glaciers. Perched high above, the summits of the Dent Blanche (4357m), the Dent d’Hérens (4171m) and the Tête Blanche (3710m) form a high cirque which separates this valley from the last descent into Zermatt on the haute Route. The amount of ice that comprise these two massive glaciers is impressive to say the least.

Even more impressive are old black-and-white photos of the glaciers a century ago, as compared to current levels. We saw an expo of the photos from the book at right this spring, taken from the same perspective of the classic “postcard views” of the Rhône Valley’s most famous glaciers, and it’s eye-opening to say the least. A great book, albeit pricey, to add to the coffee table collection.

Back to the Val d’Hérens - we hiked up to a high-alltitude summer farming hut called Bricola, with outrageous views up and down the valley. Old ruins of stone barns called “Écuries” remained, next to new barns and a modern hut with a satellite dish. At 2500m, under some of the Alps’ classic high summits, not a bad place to spend the summer with the herd.

The Ferpècle ski descent has been on my list for a long time, beginning from the Tête de Valpelline, instead of that epic run down below the Matterhorn, you take a northerly route and pick your way through the glacier; not a steep run, but more of a feast for the eyes, and a long one at that. One of my favorite writers and ski partners explains it best here, one of the joys of skiing in the Alps being the long leisurely runouts. As we hiked back down the valley, I imagined how great it will be in just a few short months, with skis on and the alpenglow even stronger in the setting sun. 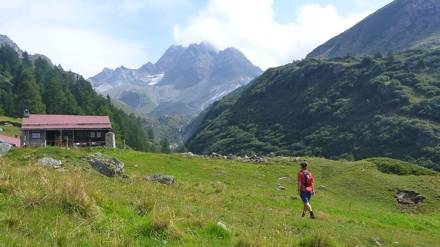 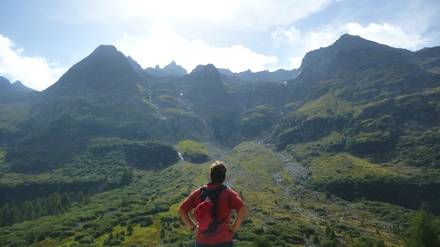 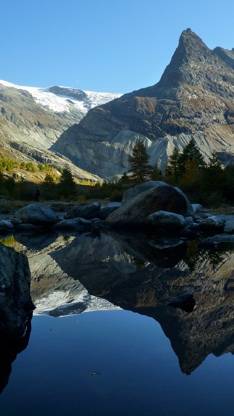 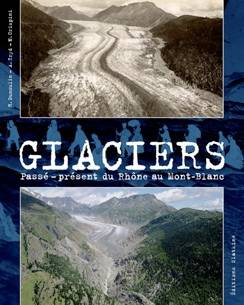