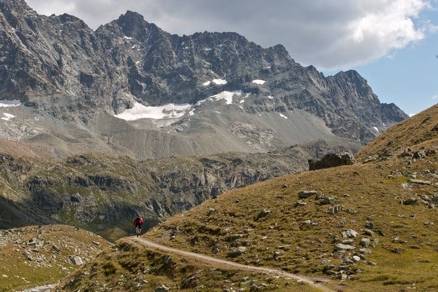 After what seemed like weeks of rain, we knew that Saturday was going to be a cracker, and a big mission was in order. Having scoped the Col de Durand 2 weeks before when we rode to the Cabane Chanrion, I knew that with a little effort (600m vertical pushing the bikes up the trail), we could reap the reward of 45km downhill, much of it on smooth Italian singletrack, all the way to pizzas and gelato in the city of Aosta.

I set out in the morning to meet the crew to take the post bus up to the Mauvoisin Dam, Switzerland’s largest vaulted dam, and a frequent site for B.A.S.E. jumpers. What I didn’t know was that the Canadian boys had burned the midnight oil until the wee hours the night before, and barely made the bus. But on board, we would up the valley towards the giant dam. After a coffee or two to somewhat regain a level of normalcy, we set off through the tunnels up towards the head of the Val de Bagnes.

Nothing cuts through a hangover like a 90-minute hike-a-bike, and as we neared the top of the Fenêtre de Durand, an impressive avalanche / rockfall on Mont Gélé roared in our ears, a quick realization that we were in the high alpine zone, far from the populated world, not another mountain biker in sight for miles.

The top of the 45km descent began as rolling shale, loose but smooth enough to carry speed and take in the huge views. We dropped down alongside a turquoise glacial lake, adding to a surreal palette of color everywhere we looked: azure skies, crisp white glaciers, emerald green valleys. The colors of summer in the Alps.

A steep technical section through a massive boulder field took longer to descend than we’d imagined, requiring a lot of down-climbing, bikes in hand. We passed a pair of Italian hikers, who thought we had pushed our bikes up the way we were coming down (I wouldn’t have the slightest consideration of doing a reverse mission, ever), and they were even more amazed when we told them that we’d come from Svizzera. But shortly after, the reward was another 3k section of perfect, flowy trail through high-alpine meadows. Past a couple of barns where farmers were working on the local Fontina cheese, and further down this amazing hanging valley.

We hit an ancient bisse, a waterway that traverses the valley, barely dropping in elevation for over an hour. It made for slow going, but a nice pace to take in all of the sights as we went in and out of the forest, past bucolic hamlets, searching for the next section of trail that would bring us closer to cold beers and pizzas. Then the mechanical problems started - first a broken chain, then a flat tire, then a broken deraillure. Then another flat. The sun was going down, and we were barely making progress. The good thing was, it was all downhill to Aosta, and we finally made the drop, one bike rendered a push-bike with no chain and no gears, and we coasted into the old Roman city around 9pm. The girls had driven the van over the St. Bernard Pass to meet us, and they held an outdoor table at the best restaurant in town. Cold beers, hot pizza, and plates of pasta and antipasti awaited us. After a long meal, we hit up the local gelateria, packed even at midnight with fashionable Italian patrons. Only 45 minutes later, a quick trip through the cross-border tunnel, and we were back where we started the day, in Switzerland. What a mission. 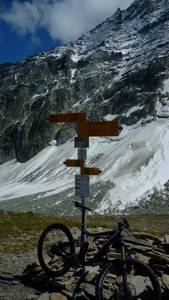 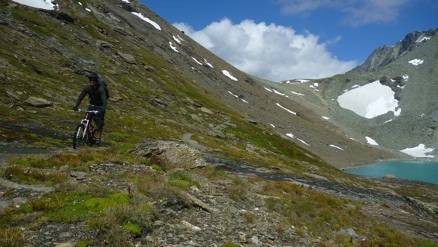