Mardi Gras, or Carnival in Europe, is taken very seriously here. In many regions, it makes our Halloween look like amateur hour (San Francisco aside). Last weekend, one of our favorite spring traditions took place in the remote Lötschental Valley, just north of the Rhône. A centuries-old pagan custom, village men gear up in the scariest costumes imaginable, and run wild through the streets. The Tschäggättä festival is like nothing you’ve ever seen, and combined with some of the Alps’ most undiscovered skiing, supreme spring heli-ski drops, and this bizarre cultural tradition, it makes for a memorable excursion - or long-lasting nightmares!

Five years ago, I was able to take part in the Tschäggättä, which was an experience I will never forget. See the original story below, as it appeared in the pages of Powder.

Come join us next year, the week before Fat Tuesday, if you want to see it for yourself!

The Freaks Come Out At Night

I can barely breathe. There’s a 20-pound cowbell strapped two notches too tight around my waist digging into my ribs. I’m wearing a natty goatskin, which is better than the St. Bernard hide Shroder Baker is sporting, complete with ears and nose. And my mask reeks of sweat and stale beer. The dungeon basement we’re in is full of people clad in similar gear. Everyone has a beer in hand, including a 7-year old who’s baffled by the gringos suiting up in his uncle’s costumes. Hand-carved wooden masks line the walls, reminders of a medieval psilocybin adventure gone horribly wrong. Dylan Hood is on the floor being manhandled by two rugged Swiss men; one has a pair of vice-grips pulling the leather cowbell strap taut while stepping on him. The boys are gripped: two hours off the plane, totally jet-lagged and wondering what the hell I have gotten them into. But I’ve scoped this out and have somewhat of an idea. Or at least that’s what I’ve claimed.

We’re deep in the Lötschental, one of Switzerland’s most remote valleys, taking part in a pagan Mardi Gras tradition that has been going on for hundreds of years. In the shadow of the 3900m Bietschhorn, the citizens of the valley have lived in fear of avalanches and the brutal winters that have robbed them of their best and brightest over the centuries. Born of these superstitions is the tradition of the Tschäggättä, which takes place from February 2nd through Fat Tuesday. There are several loose explanations for the meaning of the festival, but none are concrete. The best info I have is that all of the single men of the valley get mashed, don evil-looking masks and costumes, and run amok through the towns. My kind of party.

“You want to frighten the children,” says our host, Andre Reider, a rustic mountain man, cigar clenched between his teeth, as he cranks another costume tight – to the point of loss of circulation. “And definitely all of the girls. You can do anything to them.” This was beginning to sound like a potential cultural import back to Jackson Hole. “And never let anyone see who is under the mask,” he adds. “Even when you have a drink.” Apparently, one of these suits gives you carte blanche at every bar, restaurant, and beer cart in town. Perfect.

Gratuitous groping and harassment aside, we were in Lötschental to ski. The valley sits on the backside of the Aletsch Glacier UNESCO heritage area, the Alps’ biggest icefield. And the Jungfrau, Eiger, and Monch are within view as well. The new gondola to the top of the 3111m Hockenhorn delivers over 5 grand of vertical to the valley towns of Ferden, Kippel and Wiler, with endless undulating bowls and natural kicker zones. Steep mini-golf shots are a 5-minute sidestep away off any ridgeline, and a pair of skins provide a week’s worth of long descents to the towns up valley, a free bus ride back to the tram.

Lauchernalp is off the map as far as resorts go. At least for North Americans ski bums, magazines, and films. Swiss families on holidays have been coming for a hundred years. And the fact that when the snow sucks in Zermatt, guides bring their clients to Lötschental shouldn’t go unnoticed. But don’t expect much English to be spoken. “There’s something a little freaky about Central Switzerland,” says TGR cinematographer Matt Herriger. “It’s like, ‘Wilkommen...Muwaaaaahhaaahhaaa!’”

Without any written record of when the ritual began, details are sketchy about the origins of the Tschäggätta. One possibility stems from the valley’s isolation from the outside world. The completion of the Kandersteg tunnel in 1912 finally linked the Rhone Valley to Central Switzerland year-round, and it exits at the mouth of the Lötschental. Prior to that, a Swiss hillbilly community existed in relative seclusion.

Ruins of old settlements dot the slopes beneath the north-facing avalanche runouts of the Bietschhorn, obvious casualties of massive storm cycles and poor civic planning. In 1348, the plague tore a swath through the Alps, no doubt decimating these isolated villages. And the winters were hard. And long.

“The people from the other side of the valley were poor and desperate,” said Pierre, an unmasked Tschäggätta we met in the bar a few nights later. “So they made the costumes to disguise themselves, and they came to these villages at night and raided houses for bread and cheese.” And women? Talk about the boogeyman…Once we were all geared up, we hit the streets of Wiler which resembled a small-town parade or an open casting call for the Star Wars bar scene. The view from the narrow slits in my mask afforded zero peripheral vision, while the rest of the getup and a light buzz made for a clumsy stumble down the crowded street. Children cowered behind their parents, peeking curiously around their legs to get a view of the creatures.

Then I remembered we were supposed to scare them and grope the women. When would this opportunity ever present itself again? By the time I reached the tram plaza, I had easily terrified a dozen kids into screaming tears and hideous nightmares for months to come. Was this any way to celebrate a valley’s rise from the dark ages?

Two hundred Muppet-like monsters convened for the parade. For three weeks, the festivities had ramped up from random Tschäggätta roaming the streets at night to this: a full-blown wookie convention. We rang our bells, chased women, white-washed a few sulky teens, and couldn’t wait to lose those brutal suits. The next few days we skied ass-crack couloirs, aired off summer chalet rooftops, and slid through villages that hadn’t changed in a century. And when we left the day after Mardi Gras, it was back to normal in the valley. Until next February. 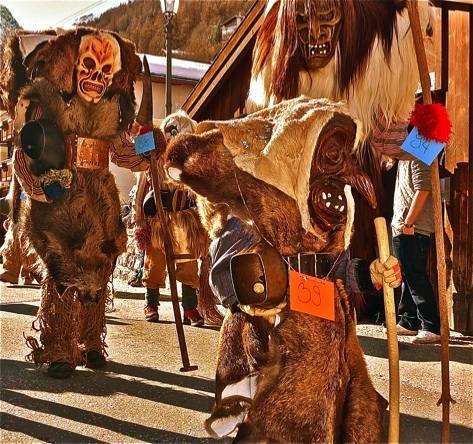 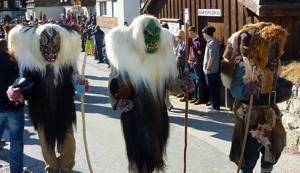 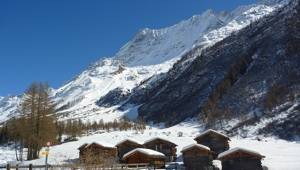