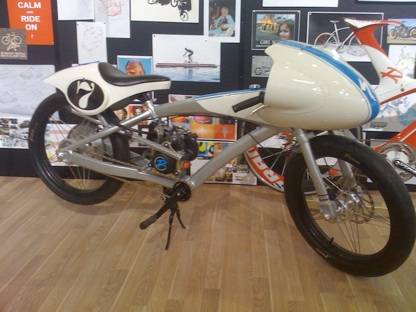 We made a quick dash over the border to Friedrichshafen, Germany last week for the EuroBike trade show, the annual manufacturers’ showcase of everything shiny and new for 2011. We’re stoked to say that we’ve renewed our partnership withRocky Mountain Bikes, whose new lineup is practically tailor-made for the riding we do here in the Alps. Their new all-mountain multi-tool, the Slayer 70, will be our weapon of choice next year (or this fall if we’re lucky enough to get ahold of them soon), with 160mm of front and rear travel, superior pedal-ability, and lightweight, but bomber construction. And the Flatline DH platform is relatively unchanged from the completely re-designed 2010 model, which is great, since it has proven to be a winning bike all season on the world cup circuit.

Rocky’s MTB philosophy is very much aligned with ours – to bring the aesthetic and feeling of backcountry skiing to mountain biking – which is what we get from long, remote trails, sometimes using lift-access to get deeper, and every run becoming an adventure. The only difference (other than the fact that “face shots” hurt a lot more in the summer), is that the tiny farm villages you pass through in the mountains are inhabited, teeming with activity, cows and cowboys making cheese. Come join us for a Swiss MTB trip, and put the Slayer to use in the terrain it was made for!

The most visible new trend in bike design is the growth of the E-bike sector. Formerly, electric bikes were only for geezers or lazy people. But the bike world has embraced the viability of these as an alternative form of commuting, and a lot easier on the gas pump. But they ain’t cheap. Seemingly every major manufacturer with a multi-platform bike line has at least one E-bike in their 2011 offerings. And in Friedrichshafen, there’s a great test zone, in an old Zeppelin hangar, where all of the models are available to ride and check out the different motor types and interfaces. Most of these were urban bikes, and more often than not, looked like Almira Gulch’s bike. Some are “pedal-assisted” motors, where as long as you keep the pedals spinning (even in a low gear), the motor kicks in, and you cruise about twice the speed you should be going. Others, you pedal a bit, and then the motor kicks in and you can coast. Both styles can be somewhat sketchy coming into a corner, or when you want to stop. But usually the brakes engage a cut-off for the motor, it just takes some getting used to.

Another popular style is the E-bike kit, that you can add on to any existing bike. They weigh anywhere from 8-15 lbs on average, including the battery and motor-driven hub, which can make your bike, well, a little bit of a Klunker. But a buddy of ours put one ofthese setups on an old full-suspension XC mountain bike, and claims it’s trail-worthy. His fiancée gets strange looks when she blows by road bikers, climbing the 1500’ ascent to their village, in a skirt and flip-flops. This system certainly isn’t as sneaky and low-profile as the Gruber Assist system (whose booth entertained a packed house for the entire show), now made famous by theallegations against Fabian Cancellara this spring.

But the most ambitious E-bike at the show was on display at the Ghost booth. Burying the battery inside the downtube, and the motor inside an enlarged bottom bracket, this beast is capable of handling any trails you take it down – 170mm (6.7”) of rear suspension ensure that. They aren’t for sale yet, as this was the only prototype, but if the market will support a bike like this, you can bet that Ghost won’t be the only brand with these on display next year.

Another prototype, more of a “conceptual” bike that the Specialized engineers whipped up, was a Speed Racer-looking badass. Again, not for sale. And definitely not an E-bike, but a good old-fashioned gas-burner.

Another carbon-positive two-wheeler is an updated version of the classic wood track-racer bikes that showed up in the ‘20s; recently resurrected and highly-coveted from the pages of Vanity Fair to the streets of L.A. Allegedly capable of speeds up to 100mph; no ironic moustache necessary.

The Derringer is probably a result of “fixie-hipster backlash”; designer Adrian Van Anz’s answer to the tight-pants, wanna-be-a-bike-messenger brigade that clogs up the line at your favorite coffee shop these days. This is the one I want. Sadly, they weren’t at the show. I doubt their free demo would’ve lasted long. I would have ridden it all the way back to Switzerland. Without even having to charge it. 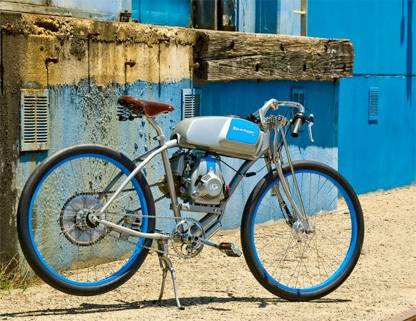 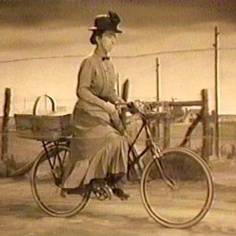