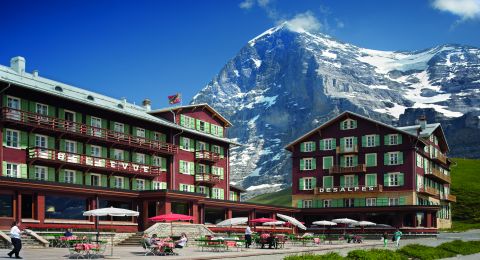 The Hotel Bellevue des Alpes ranks among the few remaining grand hotels of the nineteenth century. The location on the Kleine Scheidegg lies at the foot of the Eiger, Mönch, and Jungfrau at 2,070 meters, above Grindelwald and Wengen. At the center of the ski and hiking region, it is also the direct starting point for the Jungfraujoch railway, the highest train in Europe. The historically important hotel is still run as a family business with tradition in mind.

When the original hotel was built in 1840, goods and guests were carried up to the pass by pack mules, a climb of more than 1000 vertical meters. In 1893, Zürich tycoons built the Wengernalp Railway from Lauterbrunnen over the Scheidegg to Grindelwald, and the hotel was expanded as access became much easier. In 1912, the Zürich banker-engineer Guyer-Zeller constructed the highest railway line in the Alps, through the Eiger mountain up to the Jungfraujoch 3,466 meters (11,371 ft), and tourism boomed. The winter season adventure was a success from its first season in 1925/26, and between 1929 and 1930 the hotel was fitted to withstand the rigors of winter. In the 1930s, local mountaineering took a highly dramatic turn. The Eiger, 3970 m, had been climbed for the first time already in 1858 by the Englishman Barrington, but the 1800m high North Wall was only conquered 80 years later in 1938, and the North Wall variation known as the Lauper route, in 1932. All the famous climbers, from Barrington to Lauper and the conquerors of the North Wall, were guests on the Scheidegg; including the first to climb it in winter, the first on the direct route, the first to climb it alone, the first woman, etc.

Today, the hotel lives on with the timeless touch of another era. Run by the 5th generation of the Von Almen family, an architect by profession, who ensures that all restoration preserves the authentic history of this Belle Epoque gem. Around every corner, there's a reminder of the grand "fin de siècle” - the English-style foyer, the lounge filled with landscape paintings of the Jungfrau, the small formal banquet room in French style, with with a grand piano and view of the north face of the Eiger.

FOOD & DRINK: In the style of the Belle Epoque Hotels (and because of its remote location!), all guests dine together in the formal dining room for the evening half-board menu. 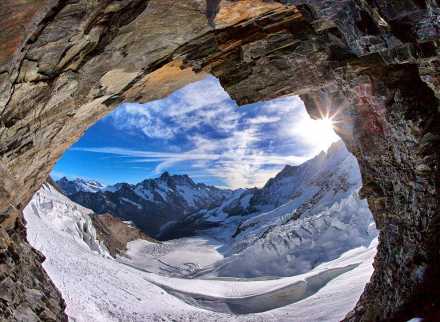